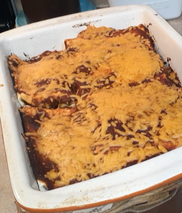 While your chicken is cooking make the enchilada sauce; set aside.  Then mix together the chopped cilantro with as much chopped onion as you like; also set aside. Once chicken is shredded add roughly half, or to taste, the enchilada sauce and stir to combine. To assemble enchiladas begin by spreading a small amount of sauce in the bottom of a greased 9 x 13 inch baking dish.  As evenly as possible between all 8 tortillas spread some of the chicken, avocado and onion mixture, and cheese.  I used about half the cheese for inside of the enchiladas and the other half for the top. Roll sides in and then roll opposite sides up to make little bundles.  Place seam side down in baking dish.  Top with remaining sauce and cheese.  Bake at 350 for approximately 30 minutes or until cheese has melted.  Makes 8.
8 net carbs per enchilada.

*If you don't want to make the homemade sauce use 3 cups of canned enchilada sauce of your choice. Just be sure to calculate the carbs correctly.