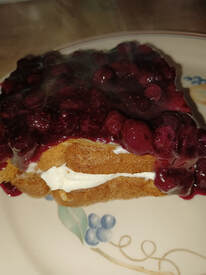 I like to begin making my berry sauce first.  It's all a matter of how much you want to make.  Add your fresh
or frozen berries to a pan and add a little bit of water and the sweetener of your choice. Cook until a softened
as you like and bring to a boil,  Thicken with a little cornstarch and water.  I start with 1 tablespoon cornstarch
to 1 tablespoon of water and it's usually enough. Allow to sit while making the French toast.

Next make the filling,  Mix yogurt and pudding mix until thoroughly combined.  Let sit until needed.

To make the French toast whisk together the egg, milk and cinnamon.  Heat a large frying pan that has been
sprayed with cooking spray.  Dip both sides of the bread into the egg mixture and fry on both sides until done.
Spread yogurt mixture between the two pieces of French toast and top with berry sauce.  Makes 1 serving.