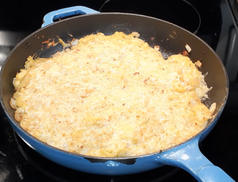 Cook squash using your preferred method. I like to make mine in the instant pot.  Cut squash in half and scoop
out seeds. Add 1 cup water to instant pot, place both halves cut side down and cook for 9 minutes.  Let do a natural
release for 10 minutes before releasing full pressure.  Once cool enough to handle scrap squash with a fork to
separate strands.

Melt butter in cast iron pan and add onion and garlic.  Cook until onions are softened, add squash and stir to combine.
Stir in thyme, salt, pepper, sour cream and half the cheese.  Once mixed sprinkle with remaining cheese and broil
on High about 5 minutes until browned.  Makes 4 servings.
3 points on Blue
8 carbs

**In the video I forgot to cut the ingredients in half other than the squash.  I had it in my tracker correctly but I
forgot to mark up my recipe sheet as reference.  It was very good as I made it but the points would be much higher.
​Above are the correct amounts.