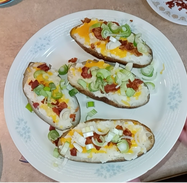 Spray clean potatoes with oil spray and then sprinkle all over with kosher salt.  Place in a large enough
crockpot to accomodate the potatoes once they are cut in half.  Cover and cook on low 6 to 8 hours or
until potatoes are done.  Let the potatoes cool to the touch.  Once crockpot is cool enough to touch take
some paper towels and clean out the water and salt residue in the bottom. Once potatoes are cool cut in half
lengthwise on the thinner side. Remove all the potato pulp leaving about and 1/8" shell being careful not
to break the peeling. To the potato pulp add the milk, yogurt, salt and pepper, and half the cheese.
Stir to combine well.  Evenly fill each potato half with the potato mixture. Evenly sprinkle with the remaining
half of cheese.  Place back into the crockpot and cook on high for 25 minutes or until the cheese has melted.
emove from crockpot and serve with bacon and onions on top.  Makes 4 or 8 servings.